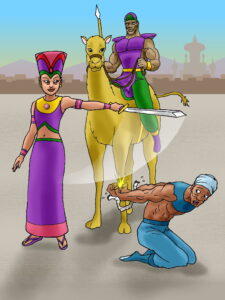 A good and virtuous life is one of those things that you would think would never go out of style. They would be continuously taught in nearly every aspect of life. Indoctrination of morals would invade every institution and be paramount of nearly all instructions.  Especially with the very young where virtuous roots can be planted, grow, and establish a strong foundation.  Moral instruction would likely not out live its usefulness in children’s books. But time tends to make somethings with a wealth of utility suddenly have little or no widespread usefulness at all.

Moral children’s stories appear to have ceased to have a place in the creation of solid virtuous young lives.  The plot of love, charity, brotherhood, peace, hard work, and good will all seem to have been written out in children literacy. What was once stories of good verses evil where good always wins in the end have somehow lost their appeal. They’ve seemingly lost their appeal to the authors and their prospective audiences. And like everything the production of children’s books tilts in the direction of the money or market.

And the money or market seems to be in children’s books where fighting, war, betrayal, dishonesty, crime, and disloyalty are the dominant themes.  Evil may not only win verses good, but it also exerts enough influence that it rallies large numbers of followers and even deserters of good. There seems to be more and more children’s stories where the cheers are for the bad guys and the good guys are booed. The stories have a growing audience and an expanding market. This trend would seem to counter the building a virtuous life with those who hold the future.

Moralistic children’s books are not dead nor dying. We must realize that children’s stories are no longer linear stories that proceed from starting point A and end at ending point B. Instead, children’s book authors are creating far more complex themes where all is not as it appears in the beginning. Good may appear to be good and bad may appear to be bad until the truth is revealed and tilts the scales inevitably toward true goodness. Children of today are in many ways better able to input these more complexed stories and adopt the most appropriate concepts from these complexes. What may appear to us from without the stories is the promotion of non-virtuous behavior and propaganda, but it may not be that way at all.  Moralistic children’s books are not wholly dead or even partly dead.  Moral instruction and lesson in children’s books are very much alive and thriving in popularity. The plots and themes may not reveal all like, in the simple and predictable ways of the linear stories of old, but they are well founded upon good and moral behavior.

In most cases the selection of children’s books is overwhelmingly of stories or lessons of good upright behavior and the triumph of good over evil. There has been no real significant shift away from these types of plots and themes. Times have changed and the linear storylines are now running parallel along with circling storylines to increase the appeal for today’s children. We must continue to read past our points of comforts to see what the author unfolds. Despite all the text and images that may seem to conflict with virtuous teachings, they may support moral foundation building far better than simple linear stories.

Should Teachers gift one point if it makes the difference in a student’s letter grade?

This may be a good place to introduce yourself and your site or include some credits.